So I’ll be honest with you, this isn’t designed to be an inside look at the theory of antennas and EM but instead show what someone with very little knowledge or access to resources can do to get some antennas which work. Luckily I have access to a VNA and can actually test the end result, but this is to show the difference between design and reality and not all required to go through the process.

What was this design process you ask? I basically just followed this excellent tutorial using the free version of the Sonnet EM simulator software:

So now after following that tutorial, you would probably have something that looks like this:

Which has the following S11:

Well that looks alright, S11 of -20dB in the desired frequency. So I transferred the design onto a PCB and sent it off to JLCPCB to have it made. Altium files + gerbers are available here

Unfortunately I didn’t check the SMA connector footprint in Altium vs what I actually ordered, so instead of properly edge mounting the connector I had to sit the whole thing on top of the board and just glob on the solder. I attempted to try and solder them differently to investigate the differences the impact of solder techniques, and as result ended up using five of my PCBs and SMA connector for testing.

Now all that’s left is to test the things, so using an Agilent N5230A VNA I measured the S11 of the five antennas. The touchstone data and Jupyter notebook used to create the following plots are available at the following link if you’re interested:
GitHub Link 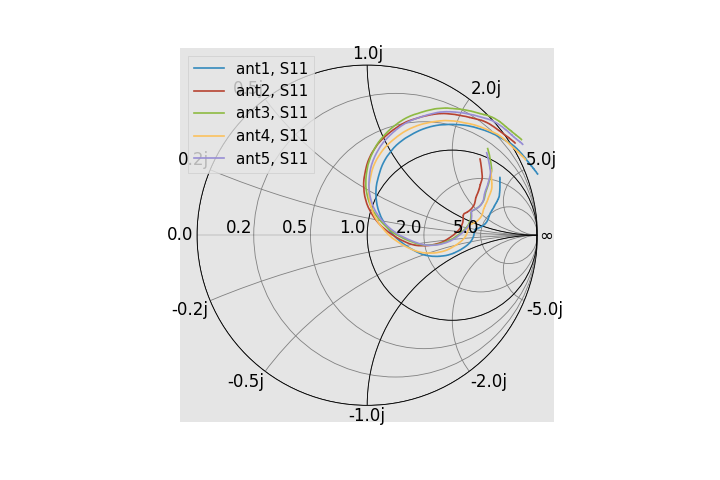 Hey that’s not half bad at all, each of the antennas seem to have an S11 of at least -17dB, with some even eeking past -20dB at resonance. Unfortunately the resonance point for all them is a tad lower than I was planning on, but this was never meant to be a perfect design, more an investigation into how close you can get without trying very hard. When we compare all the tested antennas with Sonnet’s simulation they match roughly, however this was always expected as the SMA connector was not modelled in Sonnet, let alone my dodgy soldering.

Now obviously these aren’t amazing antennas, nor are they lovingly designed, but they work and more to the point – anyone could use a similar process to what what I did to get their own antennas for whatever frequency on the cheap (~$3 SMA + 20c PCB). I also would have liked to test the far field pattern but I can’t spend forever on what is meant to be a quick and dirty project. Fianlly I had hoped to find some relation between SMA soldering techniques and antenna qualities but the only quick analysis I can see is that less solder = better S11, albeit at a lower frequency than intended, certainly nothing obvious. That being said all the data and files are on my github and linked above, so hopefully someone else finds this useful.